The chapter, published in the Rowman & Littlefield collection The 1980s: A Critical and Transitional Decade, looks at both Reagan’s political speeches and pop culture texts from the period (Back to the Future and Family Ties) in an attempt to understand the implications of political and cultural mobilizations of nostalgia in the 1980s.  It ultimately aims to reconceptualize 50s nostalgia in the 1980s as not a reductive process but a productive one, where the notion of the “fifties” was first cleansed of the historical tensions that actually gripped the era, then made to stand for transcendent values not tethered to any particular historical moment but indicative of timeless, traditional, “family values.”  The success of this process, I argue, contributed to the rise of neoconservatism and worked as a sort of retroactive historiography that altered our understanding of both “the fifties” and “the eighties.”

A PDF of this chapter is available to the Promotion and Tenure committee HERE, with the password included in the cover letter. 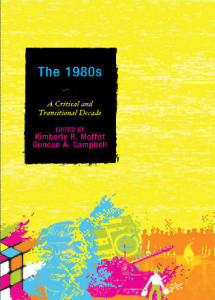