In March 2014, I had the immense honor of being invited to participate in a valedictory symposium for Professor Steven Cohan. The event, held at Syracuse University, was meant to celebrate and interrogate the legacy of Professor Cohan, and his influence on the fields of film studies, media studies, stardom, and queer theory.

My talk, “Michael Jackson and the Legacy of ‘Real Showmen’,” is excerpted below.

In the early 1970s, CBS commissioned a study from a group of graduate students at the Harvard Business School. The product of the students’ labors, “A Study of the Soul Music Environment Prepared for Columbia Records Group” became famous in the music industries as “The Harvard Report.” Noting the growing success of independent soul labels like Motown and Stax, as well as the effective segregation of the record and radio industries through a process of rationalization and market research, the report recommended that CBS’ music divisions actively seek to find artists, albums, and songs that could “cross over” from the Black-oriented soul, funk, and R&B charts to the white-oriented Top 40 and AOR charts.

No artist embodied the success of crossover more than Michael Jackson. But reaching this success was no easy feat. Jackson experienced resistance from powerful institutions in pop music before his blockbuster 1982 solo album Thriller, and skepticism from some influential Black cultural figures after it. In both cases Jackson partially addressed these challenges through nostalgia-inducing images of the Fifties in his music videos. For white, “mainstream” music audiences, Jackson’s invocation of the Fifties was meant to signal a safe, apolitical, non-sexual form of entertainment, to be distinguished from Black performers in funk, disco, and hip hop. At the same time, for Black audiences, Jackson’s use of the Fifties not only signifies a visual reclamation of “All-American” imagery of the fifties for African Americans, but also highlights the artiface of mainstream Fifties images, casting them as just a bit of showbusiness. 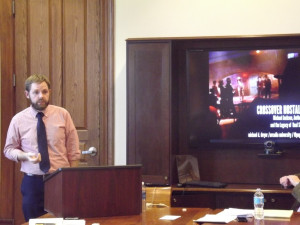